The Canine Brucella Antibody Rapid Test is based on sandwich lateral flow immunochromatographic assay. The test device has a testing window for the observation of assay running and result reading. The testing window has an invisible T (test) zone and a C (control) zone before running the assay. When the treated sample was applied into the sample hole on the device, the liquid will laterally flow through the surface of the test strip and react with the pre-coated Brucella LPS antigens. If there are anti-Brucella antibodies in the specimen, a visible T line will appear. The C line should always appear after a sample is applied, which indicates a valid result. By this means, the device can accurately indicate the presence of Canine Brucella antibodies in the specimen.

1.Review “Specimen collection” instructions. Test device, patient’s samples, and controls should be brought to room temperature (20-30℃) prior to testing. Do not open pouches until ready to perform the assay.

2.Remove the test device from its protective pouch (bring the device to room temperature before opening the pouch to avoid condensation of moisture on the membrane). Label the device with patient or control number.

3.Hold the dropper vertically and transfer 3 full drops of urine (approx. 0.15ml) to the specimen well (S) of the test device, and then start the timer. Use a separate pipette and device for each sample or control.

4.Read result between 3 to 8 minutes after the addition of samples. Do not read result after 8 minutes. 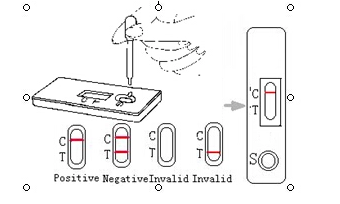 Positive: Only one pink band appears on test region of the Cassette.

Invalid: If without colored band appears on test region, this is an indication of a possible error in performing the test. The test should be repeated using a new device.

Congratulations, you have successfully submitted the inquiry form.

Your inquiry has been recorded:

Send your message to this supplier